How-To Adding an Invisible Zipper to a Pillow

So, now we're going to tackle the invisible zipper (you'll need an invisible zipper about 1" shorter than your cut fabric measurement...so, if I cut my fabric 16" x 16", I'm going to look for a 15" invisible zipper...you can also get a longer one and shorten it)! Last week, I showed you how to do a centered zipper with 1/4" fusible webbing (left pillow in picture below). The pillow on the right has an invisible zipper in the lower seam along side the piping...which is awesome, because: 1. it's hidden so well and 2. you could technically make a 2 sided pillow if you wanted to :)

Ok, so you have your front and back cut out (my pillow form was 15" x 15" so, I cut my front and back 16" x 16") and if you so desire, you've already added embellishments and piping (mine has a flower on the front (tutorial to come), so that is what the sewn circle rows are; there is also a stitchline around the entire pillow front from stitching my piping on). Pin the lower edge and baste the entire lower edge with a 1/2" seam allowance. See the next picture for more assistance!

The picture below is from the Inserting a Centered Zipper Tutorial (so the fabric pieces are shorter), but, you'll want to sew the bottom seam of your pillow as shown below. Baste the entire 1/2" seam allowance first (as discussed above), then stitch a 1.5" seamline on either end. (Note: if you have piping and your corners curve up, you can still sew it as shown below because we'll close and round your corners when we stitch around the entire pillow...tutorial to come).

Press open that seam allowance. If you have piping, press the piping towards the front (because you want the invisible zipper to hide right behind the piping when finished). Now, stitch rip your basting line open (I like to use this method of baste-press-stitch-rip because it gives me a nice, even line to line my zipper up with...as long as you sew straight). :)

Unzip your zipper. It is recommended to gently press open the teeth of your zipper (as the invisible zipper teeth are made to fold in), but, don't press too long and melt your zipper teeth. It doesn't need to be completely flattened out...just to the point that it stands up more rather than so folded over as it comes. Pins work well with the invisible zipper to aid in holding the teeth down (but, you could always try the 1/4" fusible webbing I mentioned in the centered zipper tutorial). Open up the seam allowance and pin one side of the zipper to one side of the seam allowance only. Line the top of the zipper tape up with the one side as shown to the right in the picture below (zipper face down on the seam allowance), pinning the zipper-teeth-fold on top of the ironed crease we made when we basted (on the side with the piping in it, butt the zipper teeth up as close to the piping as you can, still lining it up with the crease that we pressed in it).

And, sew this side on complete from top to bottom (again on the seam allowance only) right next to the zipper teeth.

The tutorial to make and finish this pillow is coming! But, see below how well the invisible zipper hides! So awesome! You could make your throw pillow 2 sided and display the side however your mood hits you that day! :)

Topstitching on the Jubilant

See how easy it is to add topstitching on projects using the Baby Lock Jubilant!
Read More 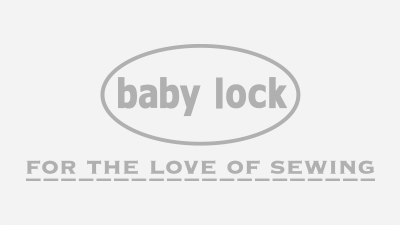 Quilts for children don't have to have batting! Omit the batting and use a good quality flannel for the back. The quilt...
Read More

I recently discovered some of the amazing features on the Lauren. For the past couple of weeks I have been trying different...
Read More

we have great classes to help you take your sewing to the next level.